J.L. Bourne is a retired military officer and national bestselling author of the horror series, DAY BY DAY ARMAGEDDON, and the dystopian thriller, TOMORROW WAR. With twenty-two years of active military and intelligence community service behind him, J.L. brands a realistic and unique style of fiction.

J.L. lives on the Gulf Coast but is sometimes spotted toting a rifle and a knife in the rural hills of Arkansas where he grew up.

Enlist now in the Phalanx email list for news about J.L. Bourne!

Check out the newest release from J.L. Bourne!

The machines brought society to its knees. Now, the last remaining humans fight for survival—and to take back what’s theirs.

Junior, a robotics expert, tinkers quietly underground. With dozens of machine kills under his belt, he knows the enemy inside and out. Alpha0verride, a reclusive black hat hacker, uses the skills acquired over a life of shady activity to outwit the hyper-intelligent machines swarming in on her. Brick, a special forces operator and one of the few Pentagon survivors, fights his inner demons to embark on the most important mission of his life.

Together they are humanity’s last, best hope—if they can only find each other in time.

From the Author
First, I brought you the cult classic, Day by Day Armageddon, where we both journeyed alongside the unnamed survivor as he trekked across the bleak landscapes of the undead. Sometime after the Great Recession, I strived to accurately depict the bedlam of a post-grid down United States in Tomorrow War. An alternate timeline where a jack boot on the throat of humanity is only one black swan event away. Now, after years of world-building, writing, and editing in my attic, Trilobyte is now ready for you, my beloved reader. Some might call it a warning of what is to come if we aren’t careful with our creations.

To me, it’s the most terrifying thing I’ve ever written.

They are closer than you think.
They will be trillions.
They will come for you.

Lock your doors and load those rail guns. The machines are here. 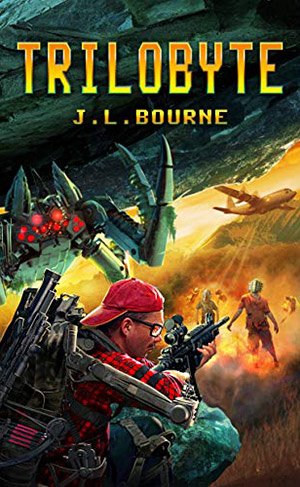